We were able to have all 3 goats trimmed and we were off and running by 7:30 am for the youth goat show.  One of the benefits of Nigerians is we were able to get all our supplies, family of 4, and 3 goats into a Pilot.

The drive was about an hour drive to St. Cloud from the house with everyone doing a pretty good job on the ride.  Once we arrived to the fairgrounds we headed to check in and get ready.  We had originally rented a stall but after talking with some veterans many families just camped out of their cars to avoid having to clean the stall at the end of the day.  We decided to try the same and it ended up going pretty smoothly.

Shortly after ten the show began and the first round was showmanship.  I had the kids rushing to change into their white shirts and black pants.  If the kids enjoy this we will have to invest in all white outfits.  The kids were divided by age and both the kids would be competing in the same round.  From what I understand the showmanship is more about the kids as to how well they handle the goats and their own knowledge about their breed.  The kids were asked to do several show movements such as lining up the goats, walking in pairs towards the judge, how to turn a goat, and how judges but goats in order.  Once they were done the judge asked each kid questions about their goat.  We were very proud of the kids for their first time.  The kids had a little break and then Eli competed with Charlie in the wether category.  This was pretty humorous since this category is predominantly for meat goats and the judge was describing the goats like a butcher listing off his meat.  We were prepared to have Charlie be last, which did happen.  We figured it would be good practice.  The last category was by breed.  One of the other neat pieces was the door prizes which the intention that there is one for each kid. 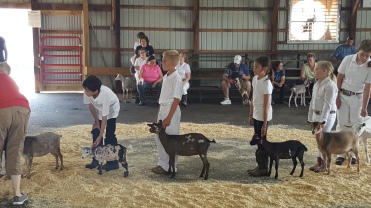 After the long day we enjoyed a calm night hanging out at the barn.  The latest update is I can confirm that I have one rooster in my group of bantams.  He was crowing a couple of weeks ago and tonight we was trying to mount a couple of the other bantams.  With this new discovery we have moved to naming the chicks.  Here is what we have come up with so far:

These two silver laced wyandottes will be named Snow White and Black Beauty.  You can guess which one is which. 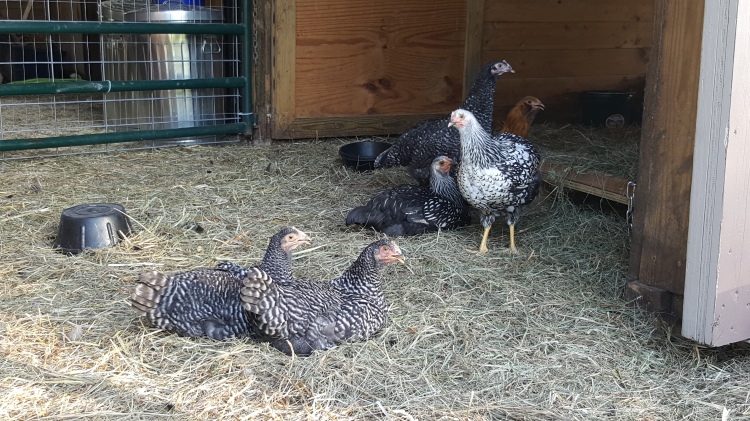 The two cuckoo marans will be salt and pepper and the barred rock will be called Roxy.  We still haven’t come up with a name for the ameraucana.  We are waiting till we figure out the name for the bantam ameraucana at the same time.

We haven’t decided which one but we are recycling the names Nancy, Barbara and Margaret.  We just need to come up with 2 more.

I know this was a longer blog but I will end it with the goats playing around.